Deap Vally own up to their sex factor, but don’t ask them to get naked for you 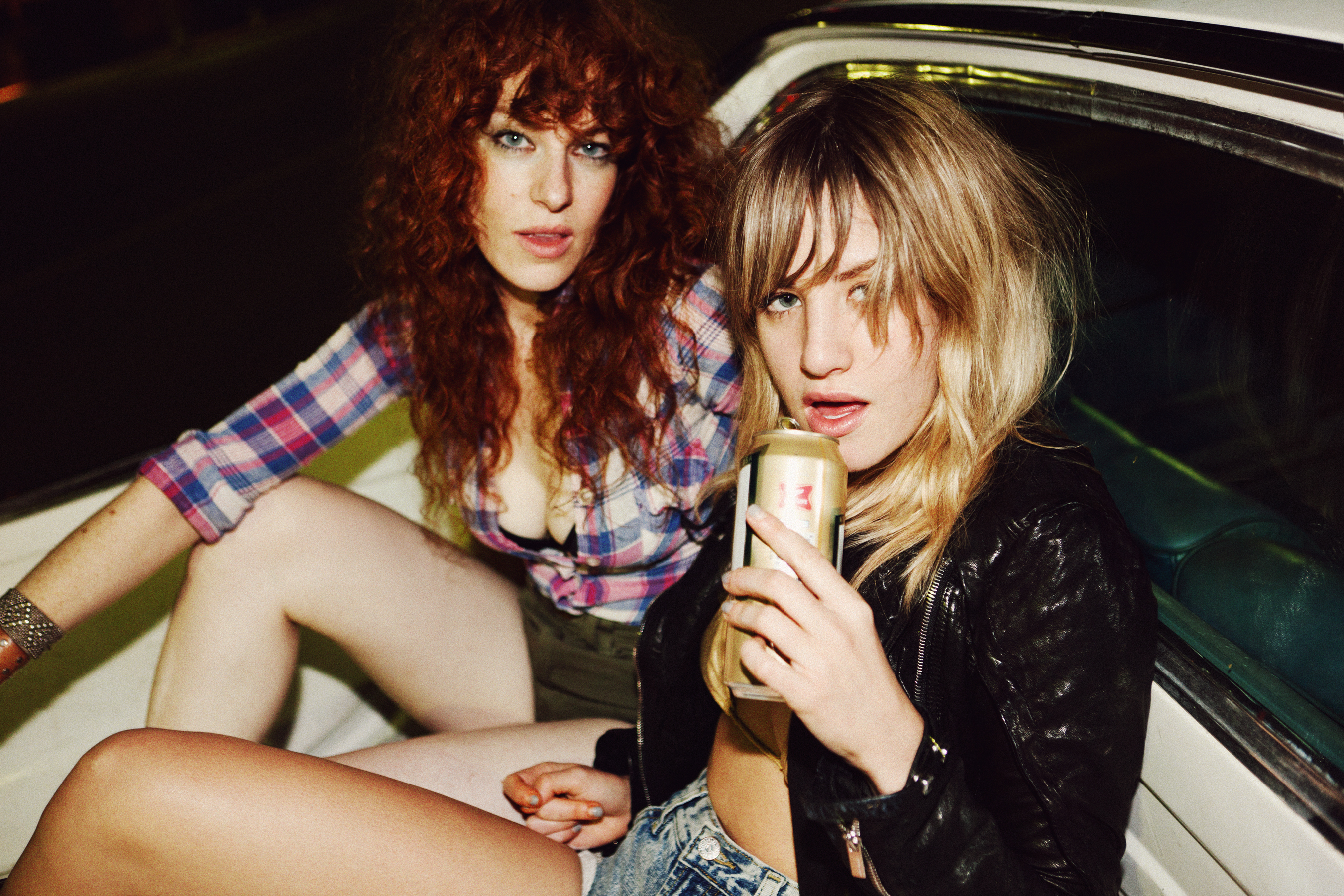 HONEY BADGERS: They do what they want, and they'll dress themselves. Drummer Julie Edwards and singer-guitarist Lindsey Troy of LA-based blues-rock duo, Deap Vally. Deap Vally

Take one look at the girls of Deap Vally and you’d be forgiven that they were dressed up by salacious male A&R executives to turn up the sex factor.

You’d be forgiven for showing your disdain thinking that these two girls have given in to the “sex sells” package that might have come with the recording contract.

But you should also be ashamed of yourself.

For as much as the sex factor with these two raucous musicians is on overdrive, it’s all their own, conscious volition, according to drummer Julie Edwards and singer-guitarist Lindsey Troy.

Answering Contented’s random questions on their inspirations, Janet Jackson and Arrested Development via email, the girls, who both met at a crocheting class years ago (they both proclaim to be both knitter and nutter), said the make-up, the trashy clothes and wildness come without any external pressure and in fact, it’s all a product of who they confidently are. Like the honey badger, we reckon that they probably couldn’t give a fuck about what the critics say.

“We naturally gravitated towards being sexually commanding on stage and now feel a strange pressure not to be that way.

“There’s a strange thing at play. We’ve gotten a lot of criticism and derision for the way we dress on stage. We just always saw it as an extension of our confidence, and of our desire to fight for feeling confident and unashamed. Ha! But we got shamed anyway,” said Edwards and Troy.

But just because they’re a bare-all kind of duo unabashed by their sexuality, don’t think they’re easy. Beneath that harsh, confident exterior, Edwards and Troy are still a couple of stand-up ladies.

“There have been a couple shady photographers and directors who expected that (sexuality), and we had to remind them that they were making the wrong assumptions,” said Edwards.

“There was a guy who wanted us to take our clothes off. I mean, give me a break! It was like an episode of Beverly Hills 90210 or something. We just said no. But then I got really grouchy.”

The Los Angeles-based duo, who will be performing in Singapore for the Dr. Martens #Standforsomething Presents DEAP VALLY gig on August 22, are now on a major tour following the launch of their debut LP, Sistrionix – a wild, 11-track (14 on iTunes Deluxe) no-holds-barred and no-bass album.

“There have been a couple shady photographers and directors who expected that (sexuality), and we had to remind them that they were making the wrong assumptions.” Julie Edwards

Sistrionix might not necessarily break new ground with its guitar-drum sound because to a better degree, depending on what you’re looking for when it comes to raw blues-rock featuring two eccentric women, bands like The White Stripes, Joan Jet, L7, the Black Keys, and Babes In Toyland have all carved a niche for themselves with this blend of stripped-down rock wrapped in a fusion of raw blues and heavy rifts. The unrefined nature of Sistrionix ticks all the rudimentary checkboxes – repetitive rifts, kick-snare-kick-snare combos that beat on, and well, the tried and tested rhythms of yesteryear that unfortunately seem to plague the band.

If only they had debuted 10 to 20 years ago, none of these would seem to matter, but who’s to say a retrospective sound for a new generation can’t be revisited and lauded with a new message?

In an age where forced under-production by so-called “lo-fi” indie bands is the new form of over-production, Sistrionix is what it is – two girls, a drum kit, wailing a capellas and a freaked out guitar on crack performed by two down-to-earth and direct women with an upbringing of rock, blues, grunge, Led Zeppelin, The Grateful Dead and musicals.

For what its worth, Sistrionix, produced by Lars Stalfors (who has worked with Mars Volta and Funeral Party, to name a few) is a no-frills, drums-plus-power-chords-plus-angst album that’s bloody fun. And to a large degree, as you move along the album, you’ll notice that earnestness of Edwards and Troy who play with sincere, idealistic passion, delivering an album filled with odes to womanhood, lectures on independence, vitriol against money grubbers, and riot-girl anthems.

“Honestly a lot of those (lyrics) are aimed at specific people we were working with, but we always want to write lyrics that have a universal resonance. And it’s very gratifying to know that we’ve inspired women to pick up instruments and challenge themselves,” said Edwards.

The girls admit to being inspired by the LA scene, but are also upfront about how high up the bar is set that bands that precede them.

“I think it’s hard for us to have the kind of perspective on ourselves that would allow us to really recognise how LA affected the creation of Sistrionix. But one thing about LA is there are so many talented, solid musicians and bands, and the bar is raised really high, so I think that pushes Lindsey and I to be great and to make an impact,” Edwards added.

Added the drummer, with an adulation for strong female performers such as Janet Jackson: “Ha! Amazing that you caught that!

“The first concert I ever went to was (Jackson’s) Rhythm Nation. I was obsessed with that record – the power and the statement of it. And I just discovered Babes in Toyland a few weeks ago, believe it or not. They are so inspiring and so good, inventive, dark, and heavy. I love it!

“Lindsey grew up in a really musical environment, going to Grateful Dead shows (her parents were Dead Heads). She loved Hole, The Distillers, Jewel, and Alanis! Alanis is pretty heavy compared to the pop mistresses of today, when you think about it. I was really into Nine Inch Nails, The Who, Nirvana and, of course, musical theatre.”

“Lindsey will be gauging your upper body strength during the show and making that determination from the stage.” Edwards when asked whether Singaporean men, who have stopped doing pull-ups in the army, can handle Lindsey’s crowd-surfing antics

Despite the mixed reviews, Sistrionix benefits from a case of “this is an album meant to be heard live” scenario, and it’s the honesty and energy of the two girls that give the album an added edge against all criticism.

Which makes a Deap Vally concert and Lindsey’s crowd-surfing antics all the more tantalising to experience, especially when it comes to the arm-strength Singaporean men who now do not have to do pull-ups in the army.

“Lindsey will be gauging your upper body strength during the show and making that determination from the stage,” said Edwards, hoping the Singaporean men in the crowd have what it takes to handle Lindsey’s crowd surfing jaunt.

“Lindsey went way far out into the crowd while I did a drum solo,” Edwards said, reminiscing their performance at the Reading Festival last year.

“Then, she ran barefoot back to the stage while I was still playing and started dancing to my beats like a shaman. The crowd was going wild. It was very cool.”

Deap Vally’s Sistrionix is righteous, playful, direct and sincere in all its efforts, and catching them playing the album live would do their debut release the justice it deserves and we can’t wait.

Add in the moral and business acumen of George Bluth Sr. from cult TV show Arrested Development, which the girls rewatched while on their Euro tour, the hidden power of Sistrionix lies in the banana stand, and “there’s always money in the banana stand”.

“So DO NOT burn the Banana Stand down!!!” Edwards proclaims.