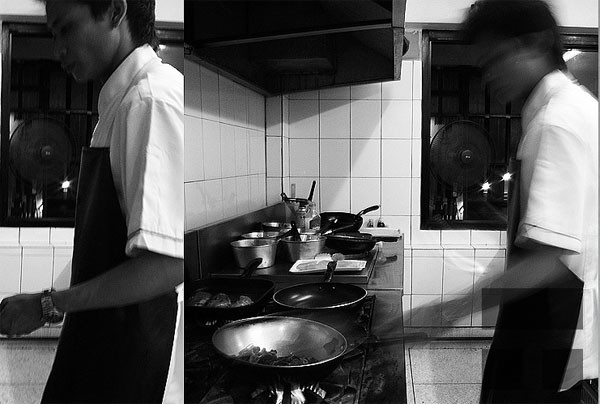 Among the many dumb ideas we’re expected to buy in this modern world is that choice is always a good thing.

You don’t need to be Aristotle to follow my logic: choice is a pain in the ass.

I say we’d be happier with a bit less choice in our lives – especially at dinner time. We go to restaurants to relax and enjoy ourselves, yet insist on inserting the fraught task of deciding what to eat at the start of the experience. When we choose poorly, there’s always some asshole sitting opposite, trying to conceal a smirk – a smirk that says, “bet you wish you had the pork.”

If Ferran Adrià showed up unannounced at your door, apropos of nothing, telling you he was bored and decided to cook you dinner, would you say: “Super. Mine’s a spag bol, Ferran, and don’t hold back on the Parmesan?” Or, simply: “Maestro. Work your magic?”

A good chef need not be confined to the same roster of tried-and-tested a la carte staples all year round. Most “foodies” will eat almost anything within reason, provided it’s cooked with skill. Perhaps, then, we should put a little more trust in our chefs and a little less in our own arbitrary prejudices. If chefs are artists – and they’re increasingly feted as such – then give them the freedom to be spontaneous and cook whatever the hell they feel like. You are not so smart.

This is the idea behind so-called “chef’s tables,” which is starting to make headway in the Thai capital. The idea is that choice is being removed from the process of eating out, or at least minimised. You are fed whatever the chef decides to cook on the day – your preferences, peccadilloes and painful childhood memories be damned. In a city where menus with the girth of phone books are still nothing unusual, this can only be welcome.

La Table de Tee, around since 2009, claims to have been the first such restaurant to launch in Bangkok. La Table has since been joined by the 10-seat branch of the Water Library on Thong Lo Road.

Haikal Johari’s superb Asian-European cooking is something that – in a just world – everyone would get to try. Alas, for most of us, shelling out THB8,000 per head on 12 courses and wine isn’t an option – unless you have a kidney you’ve never particularly liked. (My left is on its final warning.) Happily, most mortals reading this will likely be able to afford a meal at La Table and keep each organ in its rightful place. Prices have gradually risen, but a five-course tasting menu still goes for the extremely reasonable price of THB1,150. Could this be the best deal in town?

Behind the stoves is Chatree “Tee” Kachonklin, who worked for five years in a French restaurant in London’s Sloane Square, and still hasn’t notched his 30th year on this planet. The menu at La Table changes at least twice a week, with Tee coming up with new courses according to his “inspirations, the seasons or his feelings,” or so says his website. On the two occasions that I’ve eaten there, he must have been feeling pretty chipper, because his cooking had the unmistakable whiff of enthusiasm and, I dare say, a good dash of talent.

First, some gripes. The restaurant is a little hard to find, hidden away on a small lane off Soi Sala Daeng. It shares the alley with a rather dodgy looking massage parlour. You would only stumble upon La Table if you were up to no good. It’s a small restaurant with just 20 seats which feels on the cramped side. If you’re the kind of person who whispers on the phone while riding public transport, you may feel out of sorts. Of course, if you’re the kind who shouts down the phone no matter how many people can hear what you’re saying, you won’t give a shit – you never do, do you?

On my last visit, a Thai couple to my right practically mimed their entire conversation, while a pair of 30-something North American men by the windows bellowed away unperturbed. The decor isn’t exactly stylish either. A simple navy-and-silver paint job is spruced up with some artsy photos of Bangkok. One of them inexplicably reads “BREAD & CAKE” in large neon letters. It has the feel of a well-to-do student’s dining room.

Service is very attentive, but not suffocatingly so, and delivered by at least one man who bears a startling resemblance to Ian “Hyde & Seek” Kittichai. I consider that a bonus. Music is at the right volume – quiet. This was particularly welcome when, just as Kittichai brought our final course to the table, Chris de Burgh’s “Lady in Red” started playing.

In truth, choice wasn’t entirely absent from the proceedings. Of five courses on my last visit, three offered two options. Still, choosing from A and B is a lot less taxing than the usual crapshoot. At heart, Tee’s cooking is French, though there are shades of Italy and Thailand here and there. He deftly mixes in these influences without them ever seeming incongruous. The first dish is a good example: red atlantic shrimp and sautéed squid in what the menu described as “yellow curry kaffir lime leaves sauce,” which amounted to a refined sibling of panang. It was finished with a tart herb foam, and proved there’s no reason why Thai ingredients can’t be combined with French presentation to great effect.

Tee is excellent with meat and fish, always managing to cook each cut as it should be, whether a hunk of snapper, lamb rib or beef cut. On the other hand, he seems a tad wobbly on seasoning. The slow cooked glazed duck legs with artichoke cream and duck jus reduction would have benefited from more salt and a stronger glaze. On the same plate – Tee’s creations can err on the busy side – what was called “potato crusted” turned out to be, in essence, a hash brown, which would be no problem at all, were it not over-fried and greasy.

A mushroom risotto was cooked not with an Italian strain but mo taek (“pot shattering”) rice from his native Nakhon Ratchasima. It was a little under-seasoned, with extremely salty dried Parma ham presumably there to compensate, but this was still a good plate of food. A baked snapper cut was meaty and tender, though it was served in too much lime sauce, which drowned its flavour out. Fried Wagyu beef and roasted lamb rack were both very nicely treated, the latter slightly charred in the best possible way. When it came to desserts, rich chocolate mousse with a creamy macadamia nut ice cream bettered a forgettable strawberry pudding.

I’ve made a number of quibbles. The culinary faults are mostly minor and can be fixed in time. Given Tee is reinventing his entire menu at least twice a week, I’d say he’s doing a fine job. When he upgrades to larger premises – and can afford to hire a decent interior designer – I suspect he’ll become rather well known.

Right now, for THB1,150 per person, opting for a night at La Table is something of a no-brainer. And in a world overflowing with choice, no-brainers are always welcome.

This is an edited version of a Coconuts Critic’s Table article that originally appeared in Coconuts.

The Vinyl Nazi: 'I won't sell to speculative buyers and these hipsters'